We fess up – we totally skipped a week! Blame it on a crazy work schedule which meant we both had to work over last weekend, and not enough hours in the day to even tackle our laundry! (By Friday I was practically clothes-less).

But, with a full weekend on side, we have managed to get round to tackling both our laundry pile AND a project which we have been desperate to start since we returned from our vacation: A new ottoman for our living room!

Let me start at the beginning to explain how this project came about. Sometime back in April, Phil and I finally got around to getting a new TV for our lounge which ended up in a bit of a living room furniture switcheroo. When the switcheroo was finished we stood back and looked and realized that we now had a big old hole in the middle of the space which was just dying for an ottoman (a coffee table used to sit in the space, which was re-purposed in the move, so now our corner sectional was in need of an extra something in front of it).

Never ones to shy away from a challenge, Phil and I decided that rather than buying one, it would be fun to make our own ottoman, which we could fit to the space and have an unlimited fabric choice for (plus, when we checked out the cost of some of the ottomans we liked online we were a little staggered at the price! Let’s just say £875 was a little outside our budget!).

Here are some of the Ottomans we were inspired by:

So, we decided to start by having a look around for materials and pricing up our options. The only problem was that we ran into a hurdle almost right away. Buying foam to upholster the ottoman was also much more expensive than we had expected (one quote we got came it at around £90 for a single sheet!) So, our enthusiasm waned a little, and we put the project on a back burner for a while.

But, about a month later while we were on vacation in Maine, it just so happens that we were wandering through JoAnn’s fabrics, who had a big Memorial Day weekend sale on. And there, in the back corner of Jo Ann’s was a huge display of upholstery foam, all of which had 50% off!!!

We wanted 2 yards so we could double layer it for extra comfyness) which would have worked out at around $88.

To make the deal even sweeter, Jo Ann fabric also had an extra 20% off the original price Memorial Day weekend discount.

When you take into account the good US dollar to UK Pound conversion rates in May, this ended up being around £25.  Bingo! Much closer to the price we had in mind.

The only slight hitch was that we now had 2 yards of 3″ thick upholstery foam to bring back to the UK with us, in our two fairly small (and already fairly full! I’m not known for being a light traveller) suitcases. We knew this might be a problem but figured that the deal was so good that even if we ended up shipping the foam back separately we would still have made a saving on the original price we were quoted.

As luck would have it, between us, and with a little selective packing (we ended up ditching a box of Lucky Charms we were going to bring back for friends) we managed to squish the foam to within an inch of its life and get it all into the suitcase and back home with us (although we did have visions of some poor TSA operative trying to open our suitcase to do a check, and the foam springing out at him, and then having to spend the rest of the day squishing it back in!).

Once we got back from vacation with our precious cargo, we already had a pretty good idea of the type of ottoman we wanted to build, having done a fair amount of googling and pinning back when we were first planning the project. So, all we needed was a dry weekend day to go and buy our wood and cut it (we were going to borrow the garden of Phil’s family’s holiday home which is nearby, as power tools and sawdust doesn’t really mix with our carpeted apartment.)

Phil had already drawn up some rough sketches, which looked something like this:

We wanted to make a square wooden frame, with short wooden legs. On top of this we planned to put either a solid board or woven webbing. Then on top of that lots of batting, our foam and fabric.

So, here is where the second hitch in the plan (or is it the third, I’ve lost count) came in. It rained, and rained, and rained ……… and rained and rained some more (In fact, it rained so much it’s broken records for rainfall in both June and July), making our outside project a total no go. Every Saturday and Sunday morning for about the last 6 weeks we have woken up hoping it would be dry to go and get our supplies and get going, and every single Saturday and Sunday morning it has been wet.

But, then, today, a miracle happened! It was a Saturday. We woke up. And …. it was dry!!!! I’ll admit, it wasn’t exactly sunny, but there was no actual rain falling from the sky. So, we seized the day and went to our local diy store asap.

Because the wooden frame will bear the main structural weight of the ottoman, and will be totally upholstered over, we decided to go for strength over style and buy some solid 2″ by 4″ lumber to make it.

Here is Phil pondering his choice of timber. 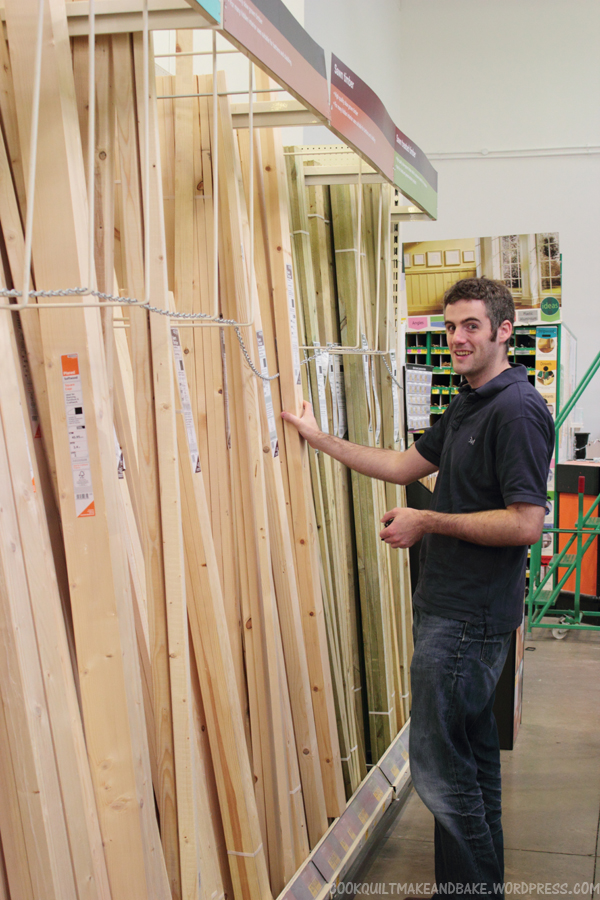 And here is Phil pondering his choice of screws ….. there are a lot of choices when it comes to timber and screws it turns out!

All that was left then was to take it back home, and bust out our good old friend the tenon saw (we don’t own a mitre saw at the moment, and decided that, as this project required relatively few cuts, it didn’t quite warrant the price). Plus, Phil has a steady hand.

So, 4 cuts later and we had the 4 sides of our base frame.

All that was left to do was to screw them together, using two, 3″ long screws at each joint.

By the end of the afternoon we had finished our frame (actually, we finished it around 3 minutes before the heavens opened! Hooray)

Here it is with the foam on top to give us an idea of size once we had finished.

So, that’s how far we have got. The next step is to add on either our board or strapping. More on that soon 😀 .

So, how did you spend your Saturday? Any exciting projects you can’t wait to get started on but keep getting rained off?

Hi, I'm Sam, he's Phil. Welcome to our blog where we share our fun down time projects. We're just a young couple, happily cooking, making, quilting and baking our way through life and love. You're welcome to stop by and share the good times!
View all posts by Cook Quilt Make and Bake →
This entry was posted in Make and tagged design, diy, foam, furniture, interiors, make, ottoman, upholstery, woodwork. Bookmark the permalink.