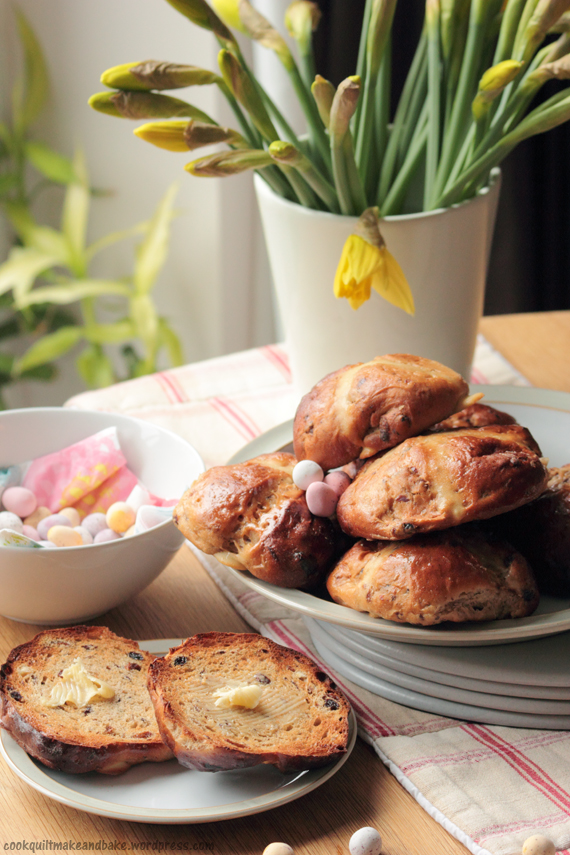 When I was younger, Easter was mostly about Chocolate, that and my school would put on an Easter play. I was Mary Magdalene one year and my Mum spent hours making me a blue shift dress and yellow head scarf / veil thing. I was never really that fussed about Easter but I did love that veil!

But as I get a bit older, I find more and more that Easter is one of the holiday’s I look forward to most. For us, Easter is a lot more low key than Christmas tends to be and its often quite changeable. Scotland doesn’t recognize Easter as a public holiday so sometimes we have to work, and occasionally we don’t. Phil’s birthday is in April and like last year, every so often falls over the Easter weekend, which adds to the celebration. We also don’t have a set pattern of who or where we spend it. Unlike Christmas which is steadfastly split half half between each set of family, Easter is more changeable. Sometimes its with family, sometimes friends, and sometimes just us. All of them are lovely ways to spend it.

But throughout, there are a few traditions, which over the years have stuck and which I anticipate and look forward too more every year. Good Friday I always make Hot Cross Buns (which is a bit of a role reversal in our house, because as you probably all know, Phil is chief baker around here ….. but Hot Cross Buns are my thing.) Saturday is always Easter Vigil and usually trying to blow Eggs and decorate them (this typically ends up in sore cheeks and more smashed shells than finished products, but it’s is always fun). Sunday we have chocolate (of course) but also a big meal, typically a roast something, with whoever is here to join us.

So, on Friday, as tradition dictates, I dug out my Hot Cross Bun recipe and had a good old baking session. Usually we are pretty good at sharing sources for recipes if they aren’t off the top of our heads, but this Hot Cross Bun recipe is a bit of an odd one. It originally came from the front of a  pink post card which has prints of ducks and flowers on it, and is covered in little holes where it has been pinned to a pin board many times over. We found tucked in a book in our old home. Phil is pretty sure at some point that the card lived in his Grandma’s house, but other than that the origins are a bit of a mystery. Now it lives safely in our recipe scrap book and is brought out once a year, every good Friday. 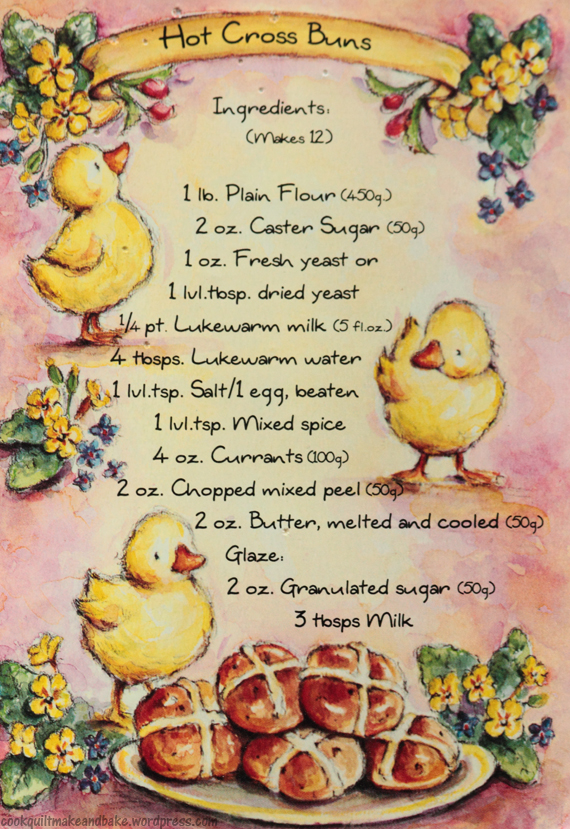 I’ll be honest and say that I don’t usually follow the recipe on the card too the letter. Without tweaks it tends to be a pretty heavy dry mix which doesn’t make great bread. But, with a little bit more rising time and some more liquid in the mix, it makes just about the most yummy Hot Cross Buns you can imagine. So, I’m sharing with you my own updated version of the recipe. They’re never very pretty, but boy are they delicious! 😀

For the glaze and cross: 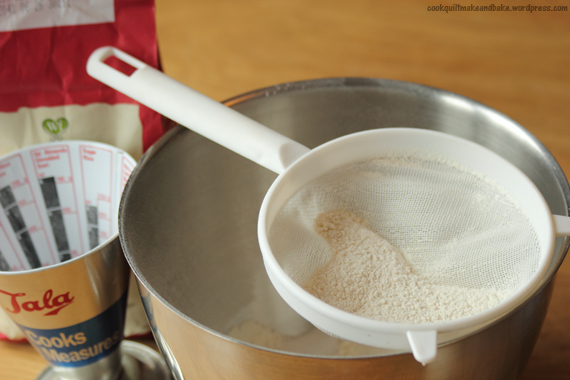 1) For starters – Sift 100g of flour into the bowl of a stand mixer. Add 1 teaspoon of sugar, the dried yeast, 2/3 cup of milk and 4 tablespoons of water. Beat together until the mixture forms a smooth, thick batter, and then leave to rise in a warm place for 30 minutes.

2) Dry mix – Sift the remaining flour, the salt and mixed spice into a separate bowl. Add the remaining sugar, the mixed currants and peel, and mix together.

3) Mix it up – With your stand mixer fitted with a dough hook and mixing on a low speed, gradually add your dry flour/currant mix, beaten egg and melted butter to the starter. At this point the mix should look pretty darned dry. Next, slowly add the remainder of your milk and water, 1 tablespoon at a time, until your dough is soft and wet enough that just starts to pull away from the sides of the bowl. I always think the best dough looks a lot wetter and more batter like than you think it should.

4) Knead and Rise – Knead your dough (I knead in the stand mixer but you could knead by hand) for 10 minutes until smooth. The cover and leave to rise in a warm place until doubled in size.

5) Knock back, shape and rise – Knock back your dough and knead gently for one minute. Then turn out onto a lightly floured surface and divide into twelve pieces. Shape into buns (I find the easiest way to do this with a very soft dough is spray your hands with cooking spray first so that the dough doesn’t stick too much)  and place on a lightly buttered and floured baking tray.  Cover and leave to rise for another 30 minutes.

6) Cross – Using a sharp knife, gently cut a cross on the top of each bun. Mix together your 1/2 cup plain flour, and 1/4 cup of water into a thick paste, and using a piping bag with a small circle tip, pipe your cross of flour water mixture into the groove you have cut.

NB: – The thickness of your flour water paste determines how clean and prominent the white cross on the top of the buns looks. But, it also adds a line of fairly tough batter to the top of an otherwise soft bun, which Phil and I arn’t huge fans of, so we tend to keep our flour water mix pretty runny, which means the crosses look a bit less pretty, but we think they taste nicer. 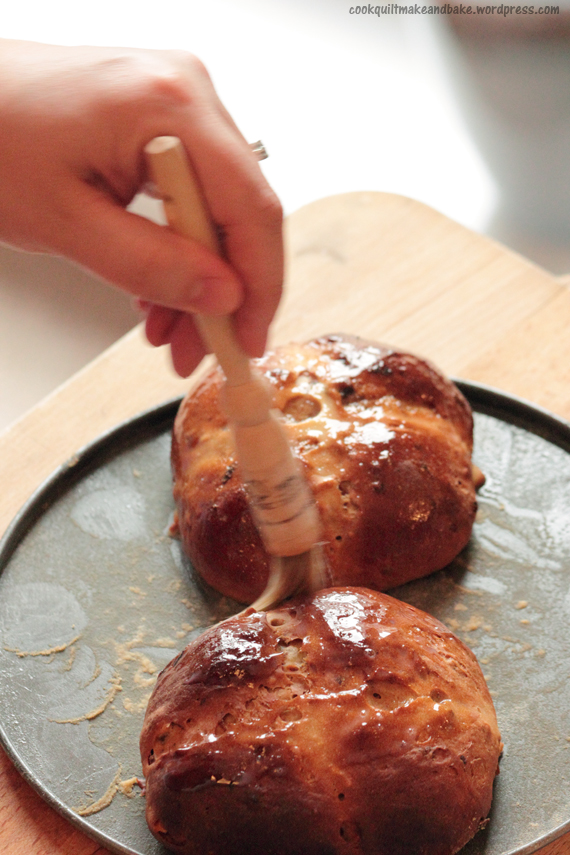 8) Glaze – While your buns are baking, mix together your glaze of sugar and milk until all the sugar is dissolved. As soon as the buns are out of the oven brush them gently with your glaze and place on a wire cooling rack to cool.

That’s all there is too it. We enjoy our toasted with butter. 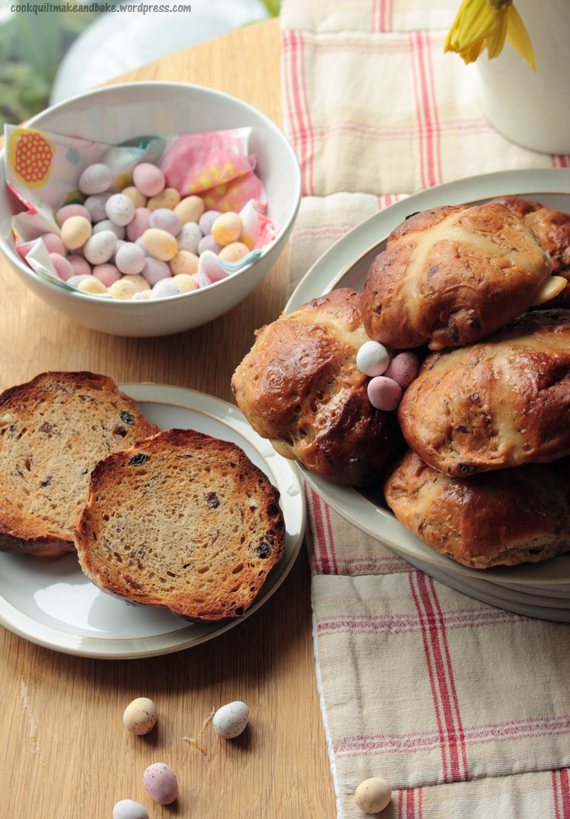 So, from our house to yours we hope you are having a peaceful and happy Easter weekend however you are spending it. Phil is about to go and put our roast in the oven. Yum!

Hi, I'm Sam, he's Phil. Welcome to our blog where we share our fun down time projects. We're just a young couple, happily cooking, making, quilting and baking our way through life and love. You're welcome to stop by and share the good times!
View all posts by Cook Quilt Make and Bake →
This entry was posted in Bake and tagged baking, bread, breakfast, cooking, dough, easter, food, fruit, hot cross buns, recipes. Bookmark the permalink.