Well our weekend got off to a bang, quite literally, as our washing machine decided to break rather impressively whilst on a spin cycle, and then decided to go for a run around the kitchen leaving much destruction in it’s wake. Sam did what I guess girls are meant to do in these situations, which was to make a funny high pitched squealing sound whilst plugging her ears with her fingers; so it was left to me to be all manly and heroic, by which I mean switch the machine off at the wall.

By some miracle, despite all the commotion, the water all managed to stay inside the machine so the cleanup operation wasn’t too horrendous. What was a little unfortunate was that we were at the time a little behind with laundry and now had a whole load of soaking wet soapy washing to contend with. Time for me to don some very handsome bright yellow marigolds and lots of hand washing and wringing out of clothes ensured. It’s funny how much for granted you take little things like your washing machine until they decide to die on you.

After the laundry was sorted, the time came to open up the machine and inspect what the problem was. This is where I have to admit to being a bit of a stereotypical boy who doesn’t like the idea of having to pay a man to come and fix things for me. Out came the tool kit and after half an hour of fiddling I found the offending part and ordered a replacement online… washing machine win!

After all that I definitely felt like I deserved something ridiculously tasty as a reward and since our nice veg box people sent us lots of garlic and fresh rosemary, focaccia was the order of the day. The recipe I used comes from “The Bread Bible”, and starts out with a pretty awesome method of preparing garlic! I should also mention before we get going that focaccia is unlike any other kind of bread I have ever made. It actually contains more water by weight than flour, making it almost like a batter until the kneading process is all but done and suddenly forms into a shiny ball of dough, which almost looks more like mozzarella than dough.

1 cup olive oil (don’t worry we only use a couple of tablespoons in the bread itself!)

1. Garlic loveliness – Peel the cloves of garlic and place in a small saucepan with the olive oil over a low heat. Cover and leave to slowly bubble for 20 to 30 minutes until the cloves become incredibly soft, almost at the point of becoming a paste but still holding their shape. Set aside to cool. 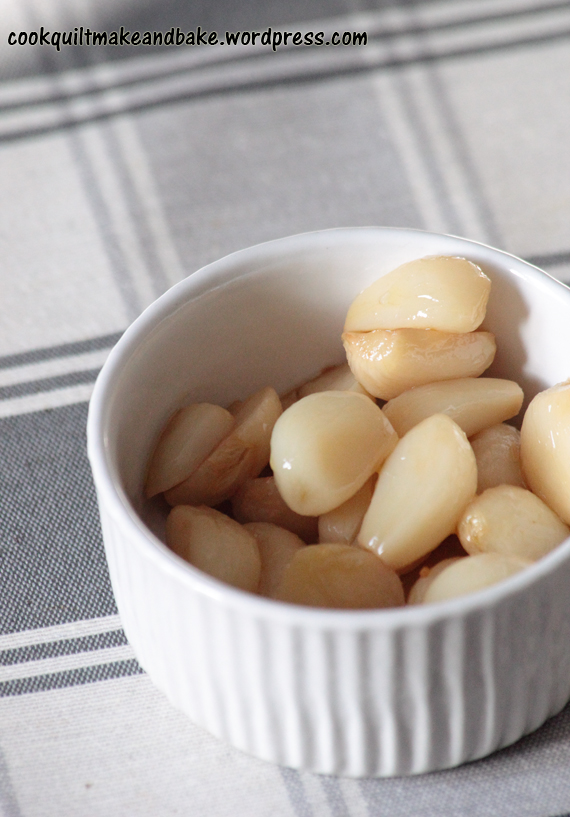 What you are left with are deliciously sweet cloves of garlic which will be fully cooked through so you don’t need to worry about a raw garlic taste on your focaccia given its quick baking time. If you are a bit of a garlic addict like me they are also super delicious spread on toast! Better still, you also have some garlic infused olive oil  left over which is great in all kinds of other recipes.

2. Whip up some dough – In the bowl of your stand mixer fitted with the paddle attachment (not the dough hook for once… I told you this was an odd one) add the flour and yeast and mix until well combined. With the mixer on low speed slowly add the water until a smooth batter is formed. Don’t be tempted to leave out any of the water, it really is needed, however counter-intuitive it feels. Turn the mixer up to medium and leave to knead for 20 minutes. Finally add the salt and sugar and mix for a minute or two to combine. The mix should almost look like melted mozzarella at this point.

3. Rise for a long time – Turn the dough out into a well greased bowl with a greased spatula and cover with cling film. Leave to rise in a warm place for 4 hours or until doubled in size. It’s a really long rise as there isn’t a whole lot of yeast in the mix, but after a couple of hours it really does start to get good and bubbly.

4. Stretch and rest – Spoon a tablespoon of your delicious garlic infused oil onto a baking sheet and turn out the dough. Carefully stretch the dough out into a large rectangle, trying  not to rip and holes in it. If it seems to be shrinking back on itself, cover for 10 mins and try again once the dough, and you, are better rested. Cover the baking sheet with greased cling film and leave to rest for another hour. 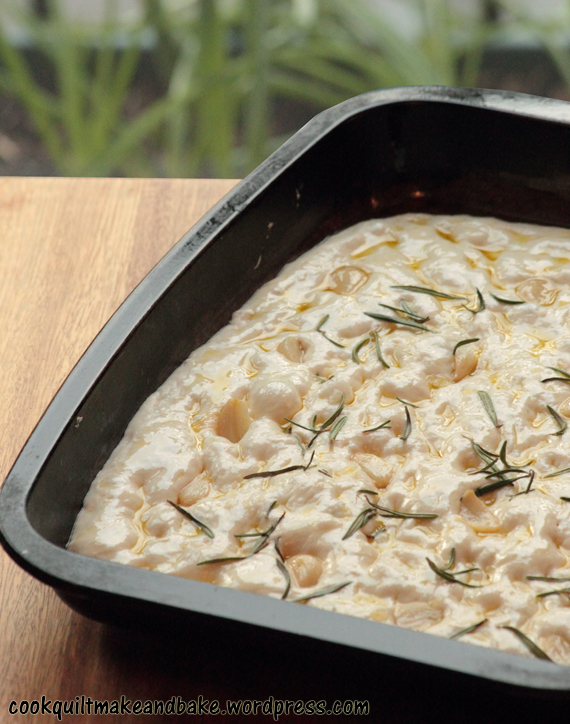 5. Sprinkle and bake – After the dough is well rested, sprinkle with seas salt, rosemary and stud with garlic as heavily as you fancy. Finally drizzle with another tablespoon of the garlic oil and place in a scorching hot oven (230ºC or 450 F) for 12-15 minutes or until golden brown all over. 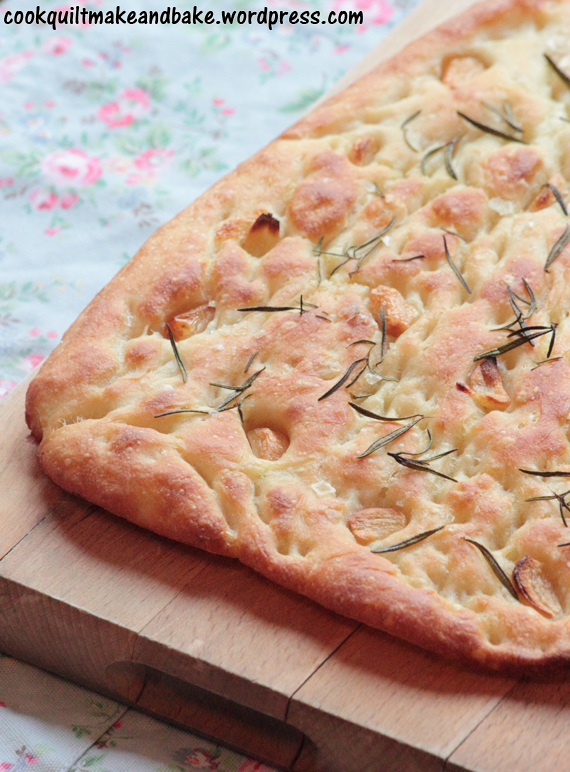 This is definitely a dish best served fresh out of the oven. In fact it was a tad difficult to get some pictures of the finished article before many hands grabbed a slice.

I hope everyone has had a good start to the week, the sun in the sky on my way to work has certainly put a skip in my step.

Hi, I'm Sam, he's Phil. Welcome to our blog where we share our fun down time projects. We're just a young couple, happily cooking, making, quilting and baking our way through life and love. You're welcome to stop by and share the good times!
View all posts by Cook Quilt Make and Bake →
This entry was posted in Bake, Cook and tagged baking, bread, focaccia, food, garlic, italian, olive oil, recipes, rosemary, yeast. Bookmark the permalink.