As I am sure we have mentioned on at least five or six occasions now, each week Sam and I have a box full of organic vegetables delivered to our door from a local farm. Aside from a few staples like onions and carrots which are in every box, the vegetables in our box are always a random mix of whatever is currently in season. We love that it keeps our food seasonal and occasionally includes something we’ve maybe never tried before.

Well this was one of those weeks. We rifled though our box of goodies and were quickly stumped by a bag of what on first glance looked like some particularly nobbly small potatoes. Now I suppose I should mention at this point that our vegetables arrive without any packaging or labeling, just a big old heap of vegetables fresh out of the ground, so we really were a bit at a loss.

So after much humming and haring, I went online, and as ever Google came to the rescue, identifying the mystery vegetables as Jerusalem artichoke. 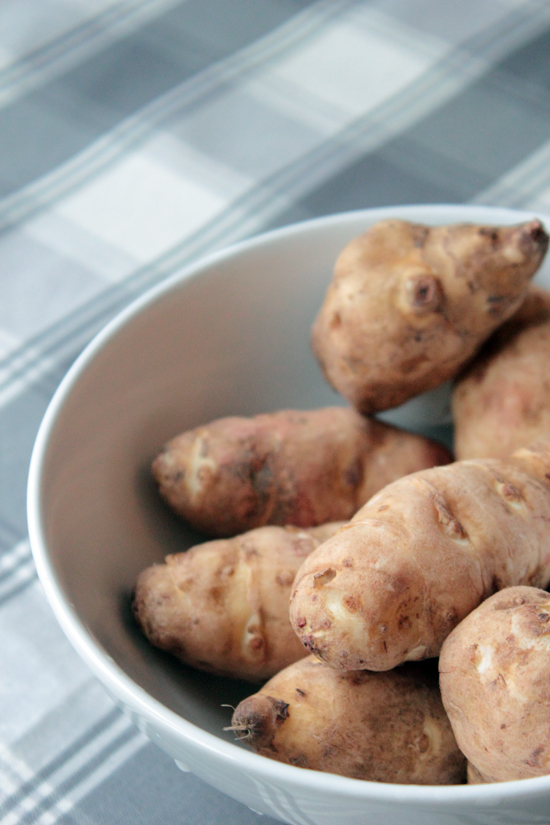 So what does one do with Jerusalem artichoke? Well I had a bit of a dig through old cook books to learn a little more and figure out what we would do with ours. It would seem that Jerusalem artichoke soup is a popular choice, but I think I have made enough vegetable soups for one winter already and was ready for something a little different. Another suggestion was artichoke puree, which sounded a little chef-y for my liking and so I settled on roasted artichoke:

1) Prep – Peel the artichokes and slice in half making sure all the pieces are roughly the same size so that they all cook in roughly the same time. Place in a cast iron skillet and add the whole garlic cloves (I didn’t even bother to peel mine, keeping it simple!). Season with salt and pepper then toss in a splash of olive oil.

2) Roast – Place in the oven at 190ºC (about 375 F) for 50 minutes or until golden brown, turning half way to make sure you don’t end up with any soggy bottomed artichoke!

3) Serve – The roasted artichoke is a bit of a halfway house between roast potatoes and roast vegetables, so are probably a slightly healthier alternative to potatoes with a roast dinner, or just a great side with your favorite slab of meat. Enjoy! 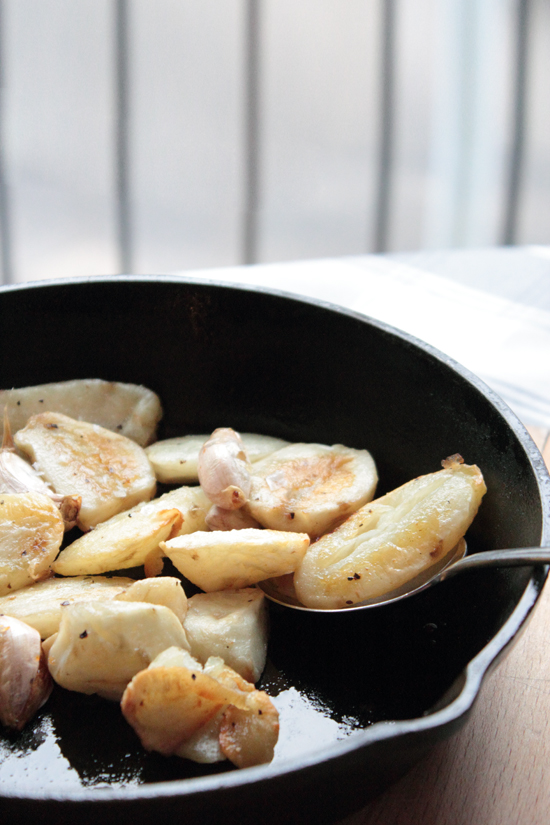 In the interests of full disclosure and “keeping it real” with your guys, I feel I should add to the bottom of this post a bit of an admission. Upon tasting my delicious garlic roast Jerusalem artichoke, Sam made a face that no cook really wants to see upon serving a dish. I think the official verdict was that they were, I quote, “Icky”. Now I don’t think that this was really a reflection on the recipe, more Jerusalem artichoke in general, which she was skeptical about from the start, but I’m not sure I’ll be able to convince her to eat another artichoke dish to test this hypothesis so you’ll just have to trust me!

I hope everyone’s week is going well, we’ll be back soon with some Chinese new year themed posts!

Hi, I'm Sam, he's Phil. Welcome to our blog where we share our fun down time projects. We're just a young couple, happily cooking, making, quilting and baking our way through life and love. You're welcome to stop by and share the good times!
View all posts by Cook Quilt Make and Bake →
This entry was posted in Cook and tagged artichoke, cooking, food, garlic, Jerusalem artichoke, organic, recipes, roast, vegetables. Bookmark the permalink.