Hi all, we are back today with a simple and delicious smelling craft project for a winter evening!

If you’re a regular reader you might remember that last week I was singing the praises of this year’s Christmas tree for hardly dropping any needles during the whole season. It seemed so sad that we had to take it down and bin it, even though it was still so green, lush looking, and happily making our little sitting room smell like a forest.

Well, as I was taking the ornaments and lights off last Thursday to pack away for epiphany, I had an epiphany of my very own! Why not keep the needles to use as a stuffing for some scented sachets. That way you can hang on to the lovely smell for months and the pretty tree won’t be going to waste at all.

I have to admit, the idea wasn’t entirely mine. Every time I smell Christmas tree needles I am reminded of Maine. We’ve been to Maine a few times, and are both totally in love with it … mmmm lobster! The gift shops all seem to be full of Balsam Fir scented sachets, and now I get the strongest smell association reminding me of happily wandering through gift shops on vacation and the smell Christmas trees give off. Isn’t it funny how smells can do that?

So enough reminiscing. The whole project probably took me about 1 1/2 hours, which is longer than it needed to but I kept getting distracted by a baking project in the background. Also, I’m excited to report that it was totally free, because I used fabric from an old jumper of Phil’s which he kindly donated to my scraps bag (it washed funny and shrunk so he doesn’t wear it any more).

I’m so pleased with the finished sachets I’ve decided it may just be the start of a new tradition, and each year replace my old ones (which I’m guessing will be less fragrant by next Christmas) with new ones from the current tree, that way we are keeping a little bit of Christmas cheer going year round (because I’m sentimental like that :D).

20 or so Christmas tree branches

An old jumper (or any scrap fabric would work fine)

1) Clip your tree: Before you send your Christmas tree out for trash (but after you’ve taken the lights and ornaments off it!) grab a pair of snippers, or kitchen scissors would do, and snip yourself a good old heap of branches. To make two sachets I used around 20 branches (I was really surprised how many needles I got off so few branches. I seriously could have made 30 sachets from our one tree if I had made a concerted effort to strip the whole thing!).

2) Dry your branches: Once I had snipped my branches I popped them into a black bag and put them in the airing cupboard to dry out for a few days. I wanted some of the needles to be slightly less stuck onto the twigs before I tried to strip them (plus, added bonus, all my towels and bedding smell great now too!) but this bit isn’t essential, it would work just fine without drying them out first, it might just take a bit more elbow grease to get your needles off the tree.

3) Strip your branches: Once they had dried for a couple of days I just used my fingers to rub the branch and most of the needles popped right off (hmmm, for some reason that sounded rude in my head he he he 😉 ). The one disclaimer I would put on this bit of the project is that the twigs got my fingers really black and sticky from the sap, and after a while all the stickiness started to irritate my hands, so it might be a good plan to wear gloves.

Even with only twenty or so branches I had so many needles when I had finished that I decided to jar some up and keep them for another project in the future. 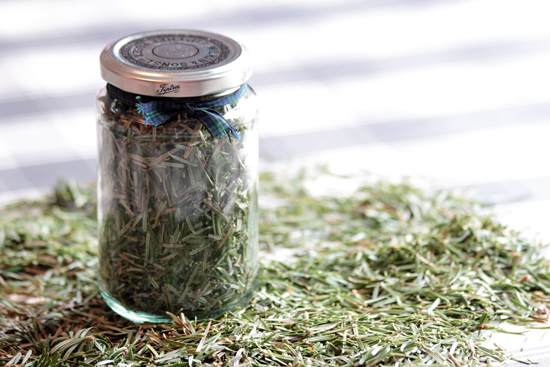 4) Cut your fabric: As I was using an old jumper I decided to make the most of the seam which already existed (any excuse to keep it simple!) and just drew two 7 inch by 4 inch rectangles against the seam, so that a already had a sewn edge. On the 3 sides not sewn I added a 1/4 inch seam allowance all the way round for when I joined the edges. It was a happy accident that where I drew my rectangles I also included some of the detailing of the extra seam on the jumper which helped my sachet look prettier.

Then I just cut out the three unsewn sides of my two rectangles and turned them inside out so the good sides were facing each other and the bad sides (what used to be the inside of the jumper) faced outward. This means, once you have sewn it you can turn it back out the right way and all the seams will be hidden inside the pouch.

(Don’t be confused by the extra seam on the picture below, that is just from the jumper detailing that I mentioned).

5) Sew your sachets:  Next I just ran my (ancient) sewing machine round the other three sides of the sachet, but stopping about 2 inches before the end, leaving a gap which would allow me to turn the sachet back the right way out and fill it up with needles.

6) Turn rightside out: Using the gap I left in my sewing, I pushed the sachets the right way out again (if it’s a bit too tight to push all your fabric back through, your hole is too small, so go back and unpick a few stitches). 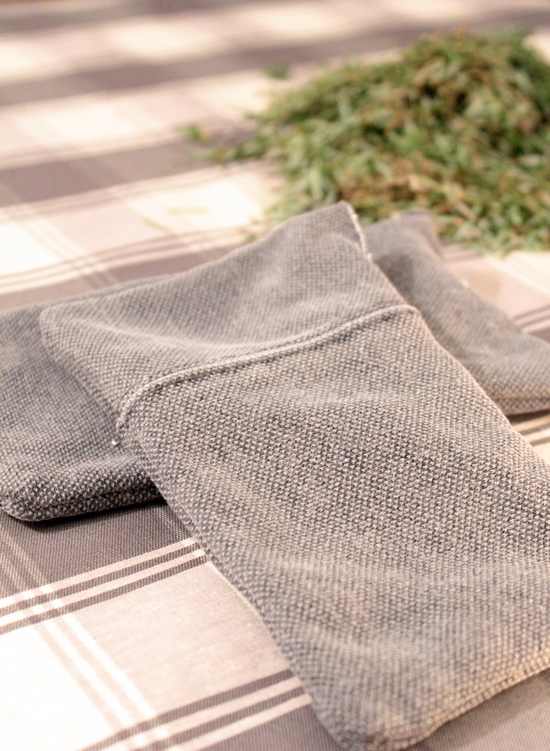 7) Fill em up:  Next I popped a funnel into the gap and filled up my little sachet with the pine needles I had stripped. We actually don’t own a proper funnel, so I just made a cone from paper and snipped the end off (although, thinking about it, its probably about time we bought one really). 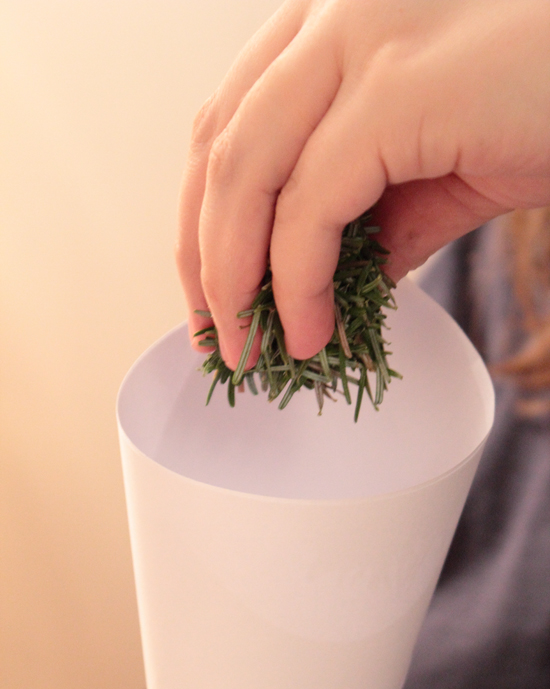 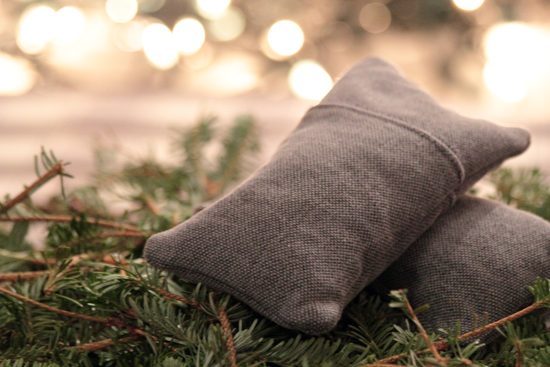 8) Sew it up: Once they were all full, I just grabbed a needle and thread and closed the open gap in the seam by hand with a few stitches. I also took two minutes to sew the date on them so that they make a cute Christmas keepsake and we can remember which year’s tree they came from.

All finished. They are now sitting happily in my knicker draw making everything smell nice, plus every time I open the drawer and get a whiff of Christmas and vacation I smile (which I don’t normally do when I just look a my knickers and socks ….. well, you know what I mean!)

Happy Wednesday. Hope you are all having productive weeks!

Hi, I'm Sam, he's Phil. Welcome to our blog where we share our fun down time projects. We're just a young couple, happily cooking, making, quilting and baking our way through life and love. You're welcome to stop by and share the good times!
View all posts by Cook Quilt Make and Bake →
This entry was posted in Make and tagged balsam, christmas tree, craft, fir, handmade, scented, sewing, tutorial. Bookmark the permalink.